The R.M. of Excelsior No. 166 (originally named R.M. of Waldeck No. 166) was established on December 13th, 1909. At the time of formation, the suggested original names included Waldeck, Hanover, Edward, Rush Lake, Greenhill, Waterloo and Ridgewood. However, on February 1st, 1916, a resolution was passed by council that “Due to the fact that the mail is very often missent to Waldeck on account of the name of the municipality being ‘Waldeck;’ therefore, be it resolved that the name of the municipality be changed to bear a name as will be suggested by the secretary.” No other references can be found in relation to the renaming of the R.M., only that the minutes of the May 1916 meeting were headed “R.M. of Excelsior No. 166” and has been consequently assumed that the name “Excelsior” was a choice made by the then secretary, J.J. Sawatzky. The Stats Canada Census of 1911 notes the population in the R.M. of Excelsior at 2,303.

With the main office located in Rush Lake, Saskatchewan, our rural municipality houses the communities of Waldeck, Beaver Flats, Main Centre, and Rush Lake. We are also proud to have the Herbert Ferry Regional Park, Rush Lake Irrigation District, Waldeck Irrigation District, breeding and grazing pastures, and pipelines. The Trans-Canada Highway and CPR Mainline also run through the R.M., helping the dominantly profession of agriculture thrive. The most recent Census of 2016 recorded the population at 806.

Click Icon to the left to zoom in on map 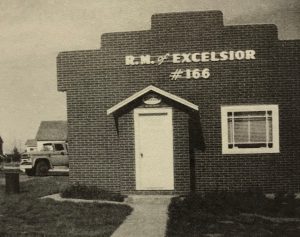